The landing approach using runway 13 at Kai Tak was distinctive. To land on runway 13, an aircraft first took a descent heading northeast. The aircraft would pass over the harbour, and then the very densely populated areas on Western Kowloon. This leg of the approach was guided by an IGS (Instrument Guidance System, a modified ILS) after 1974. Upon reaching a small hill marked with a checkerboard in red and white, which is being marked as a middle marker in the final approach, the pilot needed to make a 47° visual right turn to line up with the runway and complete the final leg. The aircraft would be just two nautical miles from touchdown, at a height of less than 1000 ft when the turn was made. Typically the plane would enter the final right turn at the height of about 650 ft and exit it at the height of 140 ft to line up with the runway. Landing the 13 approach is already difficult with normal crosswinds since even if the wind direction is constant, it is changing relative to the airplane when the 47° visual right turn is being made. The landing would become even more challenging when crosswinds from the northeast were strong and gusty during typhoons. The mountain range northeast of the airport also makes wind vary greatly in both speed and direction; thus, varying the lift of the airplane. This approach was used most of the time due to the prevailing wind direction in Hong Kong.
_________________
Apenas minha opinião de bosta... 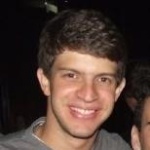