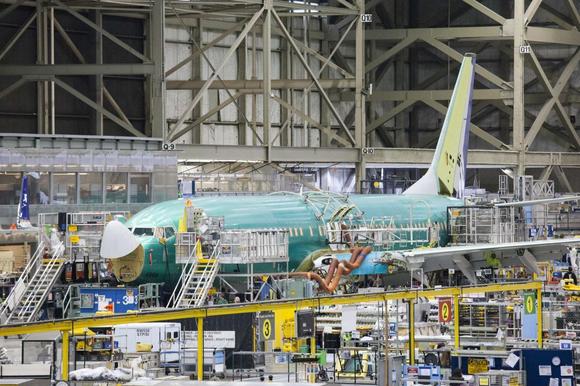 A Boeing 737 jetliner is pictured during a tour of the Boeing 737 assembly plant in Renton, Washington February 4, 2014.
CREDIT: REUTERS/DAVID RYDER
(Reuters) - U.S. aviation regulators on Monday proposed a fix for some Boeing (BA.N) 737 planes to ensure that a faulty altimeter does not cause the automatic throttle system to unexpectedly cut engine speed.
The Federal Aviation Administration said the changes to cockpit automation, if adopted, would affect 497 Boeing 737s, specifically the 600 and its later models. Chicago-based Boeing said another 778 jets would be affected if aviation regulators outside the United States adopt the FAA proposal.
Boeing said in an email to Reuters that the FAA's proposed rule would order actions the company had previously recommended to airlines.
A plane's altimeter measures altitude. The fix would prevent a false reading from triggering the plane's automatic throttle control to reduce speed on landing, possibly leading to a loss of control, the FAA said.
A Boeing spokesman said he did not have any information on how much the changes could cost. It was not immediately clear who would be responsible for implementing the changes if approved.
In 2009, a Turkish Airlines Boeing 737-800 crashed as it was nearing an Amsterdam airport when a faulty altimeter caused the automatic pilot to cut power and the pilots failed to notice in time, according to a Dutch safety board report. Nine of the 135 people onboard were killed.
Boeing said that since 2010 its production of the 737s has included software changes to the flight control computer and a cockpit voice warning pilots when airspeeds are low.
Questions about pilot reliance on automated flight controls in large passenger jets also were raised after the July crash of a Boeing 777 into a seawall at San Francisco airport. Three passengers died.
The pilots of the Asiana Airlines flight realized too late that the plane was flying too low and slowly even though they had set the auto-throttle control system to keep the plane at a constant speed.
The FAA is seeking public comment on the 737 proposal for 45 days. A timeline for final approval was not immediately clear, but the changes would need to be implemented in three years if approval is granted.
Fonte: Reuters
_________________
Carlos Amilckar