I have a few update items for your weekend that should make some folks quite happy!

PMDG 777-200LR/F SP1c:
We are preparing to put SP1c out to testing at some point between now and Monday.  (I keep promising that I am going to stop working weekends, and it never happens...  LOL)  This update is geared primarily toward resolving the outstanding issues related to the airplane wandering aimlessly during time acceleration, as well as a couple of other "odd-ball-one-offs" that have come our way and were found to be attributed to the same problem...

The wandering during accelerated time problem was traced back to some changes we made in the connection between the 777 and FSX.  We optimized the method of communication in order to more gracefully handle some of FSX's shortcomings, and in doing so it appears we might have outsmarted ourselves and created a circumstance in which data being fed to the air data system became unreliable.  This was surprisingly difficult to identify- but it has been found and fixed and we are putting this together for the testing teams shortly.

In this update we have a bunch of other items, but they are mostly nice-to-do items that we knocked out because we had the time while the other items were being researched.  As I mentioned- the focus of this update is the time acceleration problems.

I do not suspect the SP1c testing will take very long- and perhaps we will have this version into your hands before the 26th.  (Possibly by next friday?  This is our goal, but I am leaving some slack room in the schedule...  stay tuned...)

PMDG 747-400 V2 Development Update:
Development work on the 747-400 has been humming along at full speed over the past couple of months.  We are in early alpha testing with this product, and moving closer to the the point where we can begin to preview our progress for you.  The 47-400 has always been our flagship, and we are very excited to finally get around to adding this fleet to the modern list of PMDG product offerings.

One of the best aspects of thi product is the fact that it is being built on top of a stable code structure that we have used for both the NGX and the 777, so we anticipate it will really hum and sing.  From a development standpoint, there are so many things we have learned, and so many new techniques that we have developed since we started working on the original 747-400v1.0 ten years ago...  This will truly be the state of the art simulation of this airplane when we are finished.

NGX SP2:
No plan has been established for an NGX SP2 and no ETA has been established.  Our original thought process had been to simply roll updates from the 777 backward into the NGX, but this has proved unfeasible, which means the NGX would ahve to undergo a very invasive code update.

The sheer breadth of changes that we made to our code structure in order to complete the 777 makes it exceedingly difficult to work them backward as we had originally planned, and thus we must make an economic decision as to whether it is viable for us to release a no-cost SP2 update for NGX.

There are a range of alternatives for us to consider here and we will do so at some point in the future.

PMDG's First Product for use with Lockheed Martin's P3D:
Early this month we officially kicked off our development process to begin moving our headline products into direct compatibility with P3D.  We have been working with P3D and the P3D SDK since mid August, and we are in the process of discerning precisely what changes need to be made so that we can begin offering licenses that are for use in P3D.

A couple of details here that are important:  We are conducting a look-forward study on the first product that will be ported into P3D because we want to be able to offer x64 compatibility when the time comes for Lockheed Martin to release an x64 product.  Because this will be a vastly different project for us structurally, we want to be certain that we have an avenue open to support customers that may convert to x64 in the future.

There has been a significant amount of forum-lawyer discussion about EULAs and the like as they relate to P3D- and PMDG has taken the time to get multiple independent legal opinions on the matter- and this has shaped how we will be offering licenses for use with P3D.  We will announce pricing and licensing requirements once we get a bit closer to actually releasing a product into P3D.

We do not currently have a release timeframe because the developer leading this effort is also a key player in the 747-400V2 development process- and the 400 is a higher priority through the next couple of months...

PMDG's First Product for use with Laminar Research's XPlane:
The promise of PMDG's entry into the Xplane platform has been dangling out there for a couple of years now- and has recently taken some pretty bold steps toward finally being realized.  Xplane has offered some significant challenges to us in terms of fundamentally changing the way in which we develop products so that we can offer our Xplane products across x32, x64, Windows, iOS and Linux...

Part of the reason it has taken us so long to bring an Xplane product to market is that our first project is a "from the ground up" development effort that was chosen primarily because it would give us the opportunity to work with a broad range of capabilities within Xplane in order to build the expertise we need to move one of our full fledged airliner products into this simulation platform.

We are currently doing a bit of integration testing with the 777-200/300 SP1c update that is pending.  We anticipate that this will take 2-5 more days depending on how it goes.  (We have a couple of minor items with it that we are working to resolve...)

This update will not be as big as SP1, but it is bigger than SP1b- as it addresses some further refinements to the 777 that we think you all will appreciate.  I'll list them out later...

I am hoping that we can push the update in time for this weekend, but at the moment my schedule doesn't seem to be cooperating with that plan- so I just wanted to let you know we are close... 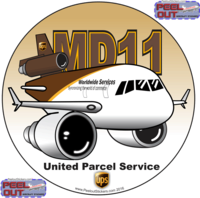